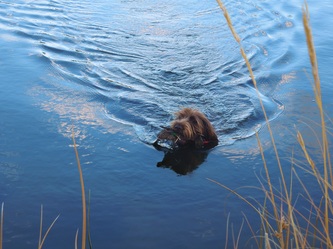 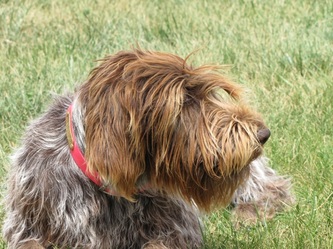 Stormy (Cascade's Autumn Storm) is out of our 2011  NAVHDA NA Breeders Award litter from Maggie and VC CH Griffe D'Automne Mr. Brown ("Jacque"). Stormy scored a maximum 112 points, (Prize I)  in her NAVHDA Natural Ability test at 10 months old.  She is extremely athletic and graceful to watch in the field.  She is approximately 48 lbs, with a nice medium dense, medium harsh coat. Stormy has nice field movement, quartering at medium range most of the time, but adjusting her distance from the gun according to the cover. She is quick to reposition herself in front of the gunners after a change of direction. Stormy has proven herself on wild birds including grouse, partridge, pheasant, and waterfowl. (loves ducks and pheasants the most) She is persistent on cripples in the water and is a tracking machine on crippled upland birds. She absolutely loves sneaking along at heel to jump shoot ducks on the ponds. Stormy lays calmly between my feet in a lay out blind when field hunting for geese, peaking out bottom end of the flaps.
Stormy has the most expression filled eyes and pretty face with the perfect amount of furnishings. She is extremely compliant and eager to please. She has the sweetest disposition,with the most gentle and calm temperament in the house, never pushy in her affection seeking, but always ready for some ear scratching. She is the kind of dog that everyone has to come over and visit at any training event, because she just sits calmly looking at everyone going by, waiting for them to bring her some love. several years ago at a NAVHDA event, I had her on a chain in the shade under my truck while I was out working the event, on a day she didn't test. I came back to find her and another member's 3 year old daughter curled up taking a nap together. You gotta love a dog that is a ball of fire in the field and then becomes a child's cuddle buddy when she isn't hunting!
More pictures of Stormy are found on the Photos Page. Stormy's litter mates are featured on the Progeny page.

Stormy has produced 3 litters with Dutch (Stirner's Dutch Master) who is a grandson of VC Goose Creeks Amigo and of Itasca Blackfoot Gold. I hunted over Itasca Blackfoot Gold some years ago and knew then that someday I wanted his bloodlines. We got great feedback on these pups as they hit the fields with their new owners.Both of Dutch's parents were owned by breeders I know well and were wonderful hunting Griffs. Dutch comes from serious hunting bloodlines.  Dutch's PennHip is in the 90th percentile for the breed. The pups that Stormy and Dutch have produced that have been tested have had excellent Pennhip scores. The Progeny Page shows many of these pups.
We did one more breeding with Stormy with Zeb for Spring 2017.
Now she is retired and is the center of attention with her new family in Oregon where she gets to hunt and fish. 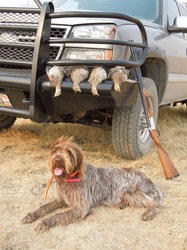 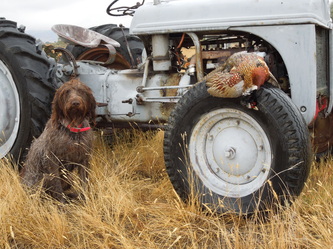 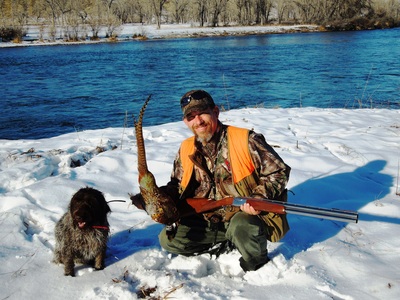